The New South Wales government is launching a $50-million plan to create a virtual battery through household demand response projects.

How could this work? The plan would involve participants switching off pool pumps, a/c units and other similarly power-hogging appliances and by discharging batteries. The surplus electricity will be fed into the grid during times of peak demand, like when there are heatwaves or if there are power generation issues. As an incentive, homeowners who take part in this project may make as much as $1,000 over a 3-year period as payment for the service.

The NSW government expects to hear from prospective participants in the Smart Energy for Homes and Businesses program until the 25th of December before finalising the plan.

The NSW government predicts that there will be about 40,000 participants who are eager to supply power for certain periods of the year. This will produce around 200 MW of power that will be immediately available for use.

According to Minister for Energy and Utilities Don Harwin, “Smart technologies play a critical role in maximising the potential of our energy system – allowing us to access and co-ordinate stored energy for when and where we need it most.”

To be eligible for the program, the homeowners’ devices have to be controllable via remote, which is already the standard for a number of air conditioner models and pool pumps. Meanwhile, batteries such as the ones that power electric vehicles –with the exception of Teslas – may also be considered for the project.

The NSW government hopes to create a business plan that is ripe for expansion as more homeowners adopt solar photovoltaic (PV) systems and add batteries.

As it is, one in six PV systems being installed are already expanding storage, and more are expected to follow suit with the increasing affordability of battery prices.

The three-year NSW demand response program, which will start in 2019, will be funded by the government’s $222M Climate Change Fund.

The advantages of demand response projects

The great thing about demand response is that it does not require the user to invest in additional generation capacity; it just requires the end-user to be more flexible about their use of electricity when demand is high.

Demand response, which could also be described as voluntary rationing, usually offers lower net pricing for each unit of electricity in exchange for lower energy consumption.

On the flip side, energy users who cannot scale back their demand would have to pay ‘surge prices’ which would go towards subsidising the voluntary cutbacks.

The rolling out of smart meters and smart appliances also helps boost the popularity and feasibility of demand response schemes because they release reliable information in real-time, keeping you on top of your consumption.

Because digital meters can exchange information in real-time with the smart grid, businesses can be notified of any changes that come into play in terms of demand reduction, such as how high or low the demand is, or if there are any price adjustments.

When the system is connected to smart appliances, it can perform demand reduction processes to ensure that your system stays below the threshold.

What are the challenges?

People are so used to flicking on a switch and having access to power whenever we need and want it so we take it for granted, leaving lights and appliances on even when we aren’t using them. This results in wasted electricity which not only affects our electric bills but also reduces supply and increases our carbon footprint.

The astronomical increase in power bills that Australian businesses are faced with today should have been something of a wake-up call – and it has inspired some change,  but in general, it can be hard to adjust habits.

Even with something as simple as leaving a light on, energy users still find it very hard to break old patterns. However, if they are paid to do it, either through direct cash payments or reduced electricity rates, then they might just be motivated to change.

Technology is advancing at an incredible rate, but the network is not. This could lead to a situation where we could invent every gadget under the sun to be fully compliant with smart demand response, but the network would not be compatible.

Until smart meters are rolled out on a wider scale, businesses will have to just take the old-fashioned approach: turn off the lights or air conditioning units manually. But once the smart meters are online, it will be a whole new ball game.

What remains to be seen then is whether appliances and machinery will be universally compatible with the smart grid and meter system.

Where are we at?

1. We’re behind the US, Japan, Korea and others

Demand response has proven to be very effective in other parts of the world. Japan, for example, employed demand response when it was responding to the nuclear disaster at Fukushima.

Some US states can already scale back demand by up to 7% in times of need while South Korea legislated to make demand response part of its laws in 2014. So where are we at?

The truth is that demand response is still in its infancy in Australia. AEMO CEO Audrey Zibelman registered success with its use in New York and immediately advocated its adoption when she took up her post over here. 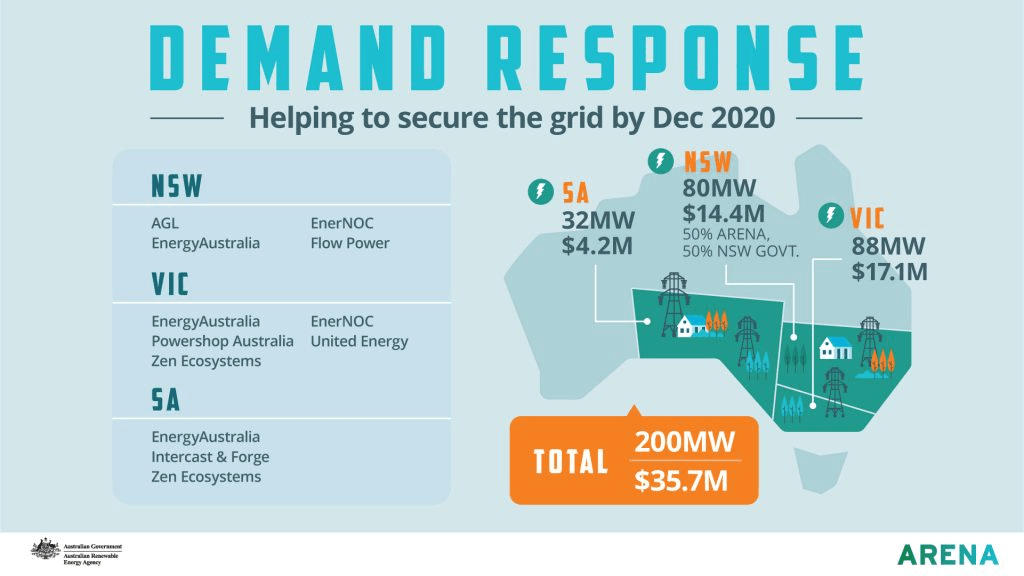 There are a number of demand response projects currently being tested in New South Wales as well as in different parts of the country which may be expanded once they prove successful during the pilot run.

This May, the Australian Renewable Energy Agency (ARENA) and Australian Energy Market Operator (AEMO) announced a 3-year trial programme where they will be offering $30M to support demand response initiatives all over the Australian market. Meanwhile, the NSW government vows to invest $2.75 million to in-state projects.

The said amounts will be paid to electricity users who pledged to reduce their energy use when AEMO requires it. The initial programme predicts that participants will collectively receive up to $12.5 million annually in order to have a standby capacity of 160MW to take offline.

Prospective sign-ups are large industries such as water companies who can shut down for operations for a few hours, commercial users who can delay production temporarily, and even energy retailers who can get small businesses and households to get involved.

Part of the involvement is for the businesses or homes to entrust control of certain electricity-powered appliances to their retailers so that they can be turned off during peak demand. In return, AEMO will pay for the shutdown time based on a market-set rate, aside from ARENA and the NSW government’s already allotted $37.5 million.

It is understood that Victoria first introduced demand response on a very limited run on 2-3 December because of the scorching temperatures that weekend. Energy suppliers are also now putting the demand response model into practice, compensating users who join their programs directly, but overall, things are still moving slowly in this regard.

Energy retailers in the region are also forming ‘virtual power stations’ or ‘smart grids’ consisting of local businesses or organisations who are willing to reduce electricity usage when called for.  For instance, when Western Australia’s grid operator, the South West Interconnected System, requires more power to supply the demand, it sends out a signal to the network’s members.

The benefit of doing so is that it alleviates the stress on the grid during periods of high demand, and participating organisations can actually receive payments both from being on standby and from the reductions coming from a dispatch.

Want to find out if your business can earn money through demand response?

Demand response is not only a good way to stabilise the power grid, but it can also be a source of income. If you want to find out if your business can earn cash by joining demand response projects, contact one of Leading Edge Energy‘s experts today.