Australian startup GreenSync will add 300 megawatts to the Eastern States’ energy distribution system by harvesting stored power and selling it back into the grid at times of shortfall.

Founder Phil Blythe explained that this will happen through harvesting behind the meter electricity from power storage owners and selling it back into the grid when there is a shortfall in supply.

In the wake of the closure of coal plant Hazelwood in Victoria, as well as ongoing concerns about the security of power provision in Australia, Blythe says that creating a virtual power station can help safeguard against future blackouts.

the market this summer with Hazelwood, this would be the best way to do it”

The former aerospace engineer aims to create a virtual power plant by collecting power from householders and businesses with solar panels, batteries, demand management software and smart meters, and connecting them to GreenSync’s platform.

When there is a shortfall, this energy can be released – at a beneficial price to those who have invested in the system.

They are also less likely than a power station or a big battery to be put out of action through environmental factors.

He believes that his project will help make up for the 1,600 MW shortfall expected as a result of Hazelwood’s closure.

“To mobilise something quickly does need some policy encouragement”

Blythe says: “When people panic, rationality goes out the door. But I think as the debate dies down and heads cool, there’ll be a recognition that there are cheaper ways to plug the gaps in the electricity market in the next couple of years.” Blythe was chief technology officer at Urbanise, an energy efficiency company, when the outbreak of the climate policy wars in 2008 and 2009 convinced him to find a way to use technology to help companies and consumers navigate the transformation he saw coming. 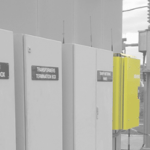 Blythe says that behind the meter energy storage can also provide peak load support for the grid more cost-effectively. The system involves householders surrendering control over the energy they generate to help bolster the grid when supply is in danger of being outstripped by demand if they are compensated enough.

It’s like homeowners and car owners making rooms and vehicles available on Airbnb or Uber. “If governments are serious about mitigating the gigawatt of capacity that’s coming out of the market this summer with Hazelwood, this would be the best way to do it,” Blythe says. “These behind-the-meter solutions are not going away. They’ll be here for the long term.”

Blythe believes that his business can do something tangible to help, but appealed to the government for assistance: “To mobilise something quickly does need some policy encouragement.”

Customer power in action Distributed energy places more power in the hands of consumers. With the right kit, they can be in charge of their energy use like never before.

GreenSync is working with Mojo Power, United Energy and ActewAGL on decentralised energy exchange (deX) trials on the Mornington Peninsula near Melbourne and in the ACT, and talking to other major brands.

You can read more about Greensync here