Energy analysts have warned that industrial gas users might still end up paying double recent prices despite the fact that the Prime Minister hammered out a deal with Queensland LNG producers to fill the domestic shortfall in supply in 2018 and 2019.

LNG prices in Asia have been climbing steadily in anticipation of the Australian government triggering the gas export restriction mechanism, but the deal announced on Tuesday sent gas prices skyrocketing.

Prices of $8-$10 a gigajoule may be on offer for gas supplied under firm contracts for an east coast buyer next year with prices for contracted deliveries typically higher than prices available on the spot market.

That compares with about $5-$6 for typical prices in expiring contracts and historical prices of $3-$4. The Prime Minister also recently admitted that the gas crisis was three times as large as originally thought.

Mark Samter, an energy analyst at Credit Suisse warned that prices could be higher based on the spot Asian LNG price for the first quarter next year, translating to at least $11 a gigajoule for a large manufacturer in Victoria, and even more for a smaller one.

Analysts and energy market watchers are warning of the risks of benchmarking local east coast gas prices against volatile LNG spot prices, as proposed by the Australian Competition & Consumer Commission in an inaugural report on gas published last week.

The deal brokered by the Prime Minister included a guarantee by the three LNG export ventures in Queensland to fill a supply gap forecast for 2018 and 2019, and a pledge to offer gas produced over and above sales contracts to domestic users first, before shipping it to the Asian spot LNG market.

But the current market price is now about 40 per cent higher than the benchmark prices that the Australian Competition and Consumer Commission used in that report as a suggestion of reasonable east coast prices. 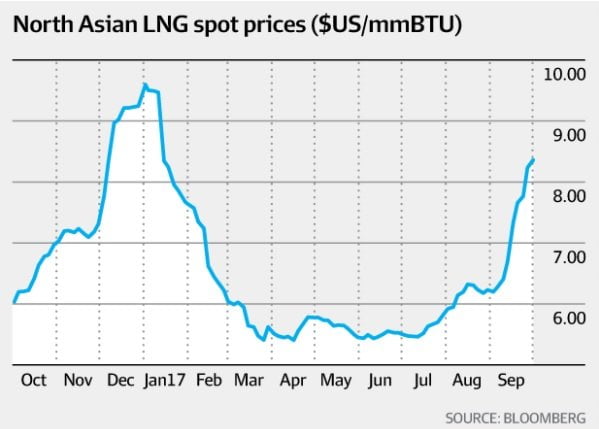 The ACCC’s calculations assumed a spot price for Asian LNG of $US6 per million British thermal units for 2018, which translated back to a local gas price of $5.87 at the Wallumbilla gas hub in Queensland.

Asian LNG prices for the March quarter of 2018 are currently at about $US8.50, suggesting a Wallumbilla price of about $9. When pipeline costs to the south are included, even a major Victorian user would be paying more than $11.

Asian LNG spot prices have been driven higher over the past weeks by strong Chinese and South Korean demand, the disruption of US exports by a hurricane and growing expectations that exports from Queensland would be restricted.

Analysts expect Asian prices to weaken again, but they also say the volatility illustrates the problem with linking domestic east coast prices to Asian ones.

Spot LNG prices reached as high as $US20 in early 2015, which would suggest sky-high Australian prices.

Other analysts are not ruling out a slump in Asian spot prices towards $US4 next year, at which price the Queensland LNG ventures would be keeping gas not needed to meet long-term sales contracts in the ground and not making it available for sale at all.

If the price is too low, then production will stop because it is not economical to produce gas at that price.

Gas producers say that increasing gas supply and the number of gas suppliers is the only sustainable way to meet long-term demand on the east coast and to put downward pressure on prices.