People are flocking to invest in community funded renewable energy with solar projects selling out within minutes of being put on offer.

You might not think it, but a quiet revolution is sweeping Sydney as people continue to try and find ways to save and make money.

With energy market spot prices still at exorbitant levels and futures prices showing no sign of dropping, people are looking to ways to generate their own power.

The latest initiative — a massive solar panel system on top of a wholesale bakery in western Sydney — saw people flocking to invest.

Within six hours, 20 investors had pitched in almost $400,000 to install a huge 230 kilowatt solar system on the bakery’s roof.

The project has been set up by volunteer-run ClearSky Solar Investments.

How does it work? 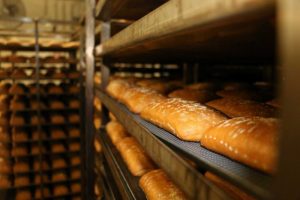 The company Bakers Maison will pay investors for the solar energy it uses over a period of between seven to 10 years. The investors get a 7 per cent return on the money they put in.

After that time, the business owns the panels and will use its energy for free.

ClearSky director Warren Yates said that the general public has a huge appetite for investment in this field and there are not enough projects to meet demand. Bakers Maison general manager Pascal Chaneliere said: “We are spending hundreds of thousands of dollars in utility bills.”

The bakery already had a 100 kilowatt solar power system, which will now be bolstered by this new, much larger community project.

Mr Chaneliere said getting investors involved to help out with the costs of the new solar panels would help further reduce their bills.

“We signed a contract for the cost of electricity for the next coming years, so it makes a lot of sense. We know exactly what will be the expenditure for the next five years.”

Investors can get 7% return on a $20,000 investment, safe in the knowledge that they are also helping local business.

Over supply of investors

A smaller project set up by community group Pingala with solar panels on top of a Sydney brewery sold out last year in just nine minutes.

What’s the hold up?

Volunteer groups said there were plenty of investors, but red tape made it hard to get projects up quickly.

“In other countries, community energy has taken off at a much faster rate than in Australia,” Warren Yates said.

“We’ve had to duck and weave our way through the regulations to set up this kind of operation.

“It’s not efficient, and we could do much more with the appropriate regulatory environment.”

Mr Yates said it was up to the government to change the rules to help streamline the process for groups trying to get similar projects up and running.

David Blowers from the Grattan Institute said community projects had potential to save the electricity grid from expensive upgrades that are passed on as costs to consumers.

He said network businesses should look to get involved in some community projects.

“At the moment it’s a one solution fits all, which is you build more poles and wires.

“And the problem with that is once people start using less grid-based energy because they’re generating their own, all of a sudden other people have to pay for the grid that remains.”

He said the Government needed to look at the way the grid costs were regulated to make sure costs were spread fairly.

New figures show more than 50 community solar projects are up and running across the nation, with individuals investing almost $24 million.

But Australia remains well behind Denmark, which has 5,500 projects up and running, many of those wind farms.

Scotland has more than 500 community energy projects, while Germany has 880 energy cooperatives.