Renewable energy sources generated more power than brown coal between December 2017 and February 2018, with a total of just under 10,000 Gigawatt Hours.

A report by Green Energy Markets found that during the period under review, renewable energy sources generated 9,880 GWh while brown coal generated about 9,100 GWh.

Renewables also outperformed gas generators by 40%, with the latter generating about 6,000 GWh of power. Diesel came in lowest with a negligible 42GWh.

Black coal is still top of the energy generation list, but no figures were listed by Green Energy Markets.

Green Energy Markets drew on data published by AEMO which states that black coal has a generation capacity of 22,000 GWh, which is expected to drop by 16,000 GWh by the year 2050 if the retirement of coal fleets go ahead as planned.

In February, 17% of all electricity on the National Energy Maret was generated by renewable sources.

The report, commissioned by GetUp, found that renewable sources of energy were generated particularly large amounts of electricity when it was most needed. 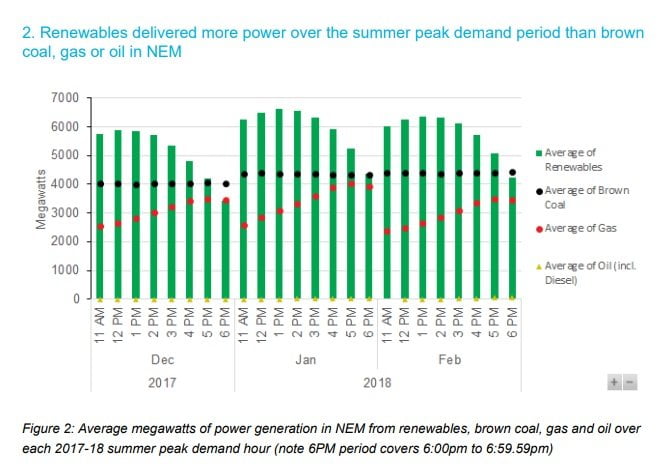 Renewable sources of energy produced 32% more than brown coal during summer between 11 am and 7 pm, a time of peak demand.

The report also extrapolated data that showed solar in particular exceeded the maximum output of mothballed Hazelwood power station over the prior summer by between 48% (at 4-5pm) up to 162% (at 12pm-1pm).

Solar, in particular, was working to support the system, on average producing more than Hazelwood was capable of producing between 9 am and 5 pm.

A further 5,000 megawatts of large-scale renewables projects were under construction in February, supporting 17,445 jobs.

Rooftop solar PV installations also continue to keep up a good pace with February’s 117 megawatts and 17,252 of installed systems for the month closely in line with November’s all-time record.

These systems supported 5,674 full-time jobs in installation and can be expected to deliver $208m in electricity bill savings over the next ten years, while producing an amount of power equal to the electricity consumption of 33,826 households.