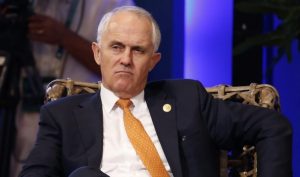 The Prime Minister was referring to the recommendation by Chief Government Scientist Alan Finkel to introduce a Clean Energy Target to lower the country’s emissions.

Mr Abbott has gone on record saying that the Finkel recommendations are effectively a tax on coal and a “magic pudding which does not exist”.

A visibly angry Mr Turnbull said that what the country needed was strong and stable leadership is what is needed. “Glib answers and one-liners have been of no assistance in keeping Australians’ energy secure and affordable,” he said.

Tensions over climate policy are high in the Coalition, which has already cost Malcolm Turnbull his leadership once, when he was replaced by Mr Abbott.

Finance Minister Mathias Cormann denied Mr Turnbull’s leadership was under renewed threat. “No, not at all,” he said.

Senator Cormann said Mr Turnbull was listening to responses to the Finkel report and giving the party room an early chance to debate it. He described climate and energy measures as a complex policy challenge.

Senator Cormann stopped short of repeating the criticism he made of Mr Abbott in February when he described some of the former leader’s comments as destructive and unhelpful for the Government. But he rejected the view the Finkel proposal for a clean energy target would be a tax on coal.

“This is not a tax on coal. The biggest tax and the biggest cost that we could impose on consumers and on taxpayers is to do nothing,” he said.

“If the status quo were to continue, energy prices will continue to go up and up and the stability in the system would continue to be at risk.”

Energy Minister Josh Frydenberg  said that the disquiet  is a result of backbenchers’ concern that businesses and households are finding it very tough when it comes to electricity prices and they want to be certain that prices will be lower under any policy that is proposed and followed through with.

But he added that the debate about the Finkel report had a long way to run.

Some MPs, including Nationals George Christensen, are calling for the Federal Government to invest in new coal-fired power plants as a way of ensuring reliable and low-cost electricity supply.

They argue that the Federal Government had already said it was prepared to intervene in the gas market to ensure the fuel remained available for the domestic market.

Liberal backbencher Craig Kelly suggested emissions should be cut more into the future to take advantage of improving technology.

“That would give you the opportunity to actually use a lot of these technologies as they are developing, rather than jump in now and spend billions of dollars in capital investment in some renewable technologies that in three or four years could be redundant,” Mr Kelly said.