Gas giants and state governments have been ordered by Prime Minister Malcolm Turnbull to shore up supply or face strict export limits in the face of an impending gas crisis which is three times bigger than originally thought.

Mr Turnbull has admitted that the looming gas crisis is three times worse than was originally thought. He issued the order after receiving two reports from the Australian Energy Market Operator and the Australian Competition and Consumer Commission.

The gas crisis is particularly bad on the East coast where has shortages over the next two years are expected to be considerably higher than projected only six months ago. 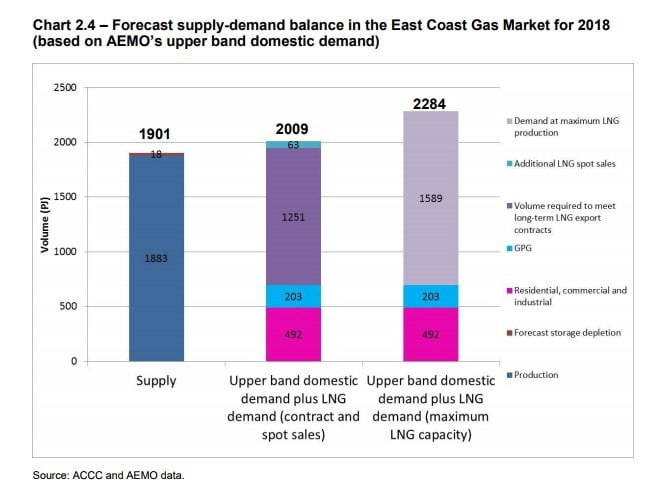 Mr Turnbull said official figures showed that the shortfall will be of about 110 petajoules, adding that the recent increases in gas prices were the “single biggest factor in the current rise in electricity prices” because gas sets the wholesale electricity price.

He also pointed to a “comprehensive failure” by some state governments to develop gas resources.

“Queensland is producing most of the gas on the east coast of Australia. But both Victoria and New South Wales are not doing enough to solve the gas crisis,” he said, adding that NSW should approve Santos’ contentious Narrabri Gas Project.

The Prime Minister said that the Federal Government will invoke its new powers to restrict gas exports if exporters and states with gas development bans – Victoria and NSW – did not show how the shortfall will be met.

The sweeping powers were introduced on July 1 this year and are known as the Australian Domestic Gas Supply Mechanism.

If the powers are invoked, LNG projects that draw gas from the domestic market to limit exports, or offsetting the problem with new sources of gas.

The mechanism has been designed to come into effect at the start of a calendar year, and decisions on the level of shortfall and restrictions applying to each exporter must be made before November 1.

Mr Turnbull said the government’s announcement of potential export controls earlier this year meant “more gas was brought into the market, but it has clearly not been sufficient to date”.

Gas exporters are vehemently opposed to export restrictions, which they say create risk.

On the flipside, the Australian Industry Group says pressure should be applied to gas exporters to ensure industrial businesses can access affordable gas supplies. Industrial users account for more than 40 per cent of Australia’s gas consumption.

Mr Turnbull said he talks with the chief executives of major gas exporters and said the government expected them to demonstrate that they will ensure that there is not a shortage of gas next year on the east coast”.

Victoria government lays the blame squarely on the coalition

Victoria’s Labor government hit back at criticism by Mr Turnbull, pointing the finger directly at the Federal Government for lack of leadership.

A Victorian government spokesman said: “Malcolm Turnbull’s reluctance to act is symptomatic of his inability to lead on energy policy. There is only a shortage of gas because Australia exports two-thirds of our supply overseas.”

The Victorian Government said it was absurd that Australia is in a predicament where it’s cheaper to buy Australian gas in Japan then it is here at home.

Victoria’s Andrews government last year banned the gas extraction process known as fracking, in after a strong reaction by the community.

“AEMO’s analysis indicates that as more renewable energy generation comes online in 2018 and 2019, there will be a reduction in the need for gas for gas-fired electricity generation,” a Victorian government spokesman said.

“This shows that Labor government’s renewable energy targets are assisting with enhancing the security of electricity and gas supply.”

In Coalition-led NSW there is a ban on the use of so-called BTEX chemicals in fracking, as well as bans on coal-seam gas exploration within two kilometres of residential areas and in key horse breeding and viticulture areas.

The focus has instead turned to the potential of renewable energy.

Gas exporter Origin said it was aware of the need for reliable gas supply at sustainable prices.

“We continue to actively sell gas to domestic customers and our recent sales demonstrate we are making supply available and prices have come down rapidly from a peak in April,” said Origin’s head of energy supply and operations, Greg Jarvis.

You can read the full ACCC report here.

Get in touch with us today for a free quote and energy evaluation by visiting our website, or calling us on 1300 852 770.