The facility will produce 400 Megawatts of power per day and up to 20,000 kilograms of hydrogen. It would include 150MW of solar, 150MW of wind, as well as up to a 50MW hydrogen plant along with up to 400MWh of battery storage, most likely with Tesla.

In a meeting with residents last year, Neoen’s Garth Heron reportedly told residents that the battery – as then planned – could supply 18 percent of the state’s households for four hours in a blackout.

The project is receiving the support of the South Australian state government, which has committed $25 million in grants and loans to Neoen to finalise plans for the hydrogen superhub. The site for the project has been proposed at Crystal Brook, in South Australia’s Mid North.

South Australia will provide a $1 million grant to help Neoen complete its feasibility study for the  Hydrogen Superhub, and will later provide a further $4 million grant, and a $20 million loan if the $600 million project gets the nod at planning application stage.

Neoen already owns the Hornsdale Wind Farm in Jamestown, South Australia, which is hooked up to the Tesla lithium-ion battery storage facility. Neoen has also been tasked by the Victorian state government to build a wind farm. It is also producing solar power in New South Wales for EnergyAustralia.

The Crystal Brook facility will produce up to 400 megawatts of solar and wind power each day, which will power the site’s hydrogen ‘electrolyser’ to potentially produce 20,000 kilograms of hydrogen daily. 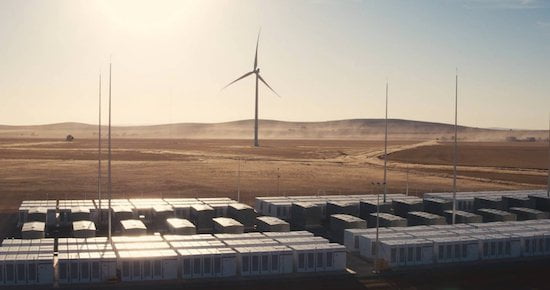 Hydrogen production will be supported by energy generated by the solar and wind farms and will likely be exported to Asia to compete with LNG.

Franck Woitiez, the managing director of Neoen’s Australian operations said the project would supply SA with renewable energy and would benefit other Australian states.

“It has the potential to reach beyond our electricity grids, and supply South Australia’s locally produced clean energy to other states and to our nearby trading partners,” he said.

South Australia goes to the polls on March 17 and the Weatherill government has pushed renewable energy and independence from the federal energy grid as major campaign issues. There have been a series of project and funding announcements, and the SA government announced that it has a new 75 percent renewable energy target for 2025, along with a 750MW storage target.

South Australia already sources 50 percent of its electricity from wind and solar, and the Australian Energy Market Operator says this could rise to 73 percent by 2020/21, and up to 80 percent by 2026/27.

Leading Edge Energy is a commercial energy broker and consultancy firm in Australia. We provide expert advice to help clients compare options for electricity and gas so you can make immediate savings on your energy costs and gain control of your energy use.

Through our holistic energy cost-reduction process and analysis, we can ensure that we’re providing you with the best solution for your business’ unique requirements.

Contact us for inquiries or fill in our form to get started on your obligation-free consultation!