ElectraNet projects that the proposed interconnector between New South Wales and South Australia will save energy users up to $20 and $30 per year respectively on their power bills.

The transmission company was tasked to come up with modelling for the project proposed by the new Steven Marshall government in South Australia.

The Liberal government was voted into power in 2017, replacing the pro-renewable Labor Government led by Jay Weatherill.

The Marshall government said it would back the National Energy Guarantee if the Federal Government gave the green light to the new interconnector project.

ElectraNet released its draft report early in July and said that a new electricity transmission link between the two states would deliver substantial economic benefits.

Chief Executive Officer Steve Masters said that the net market benefits from the project were estimated to be at $1 billion over a 21 year period. 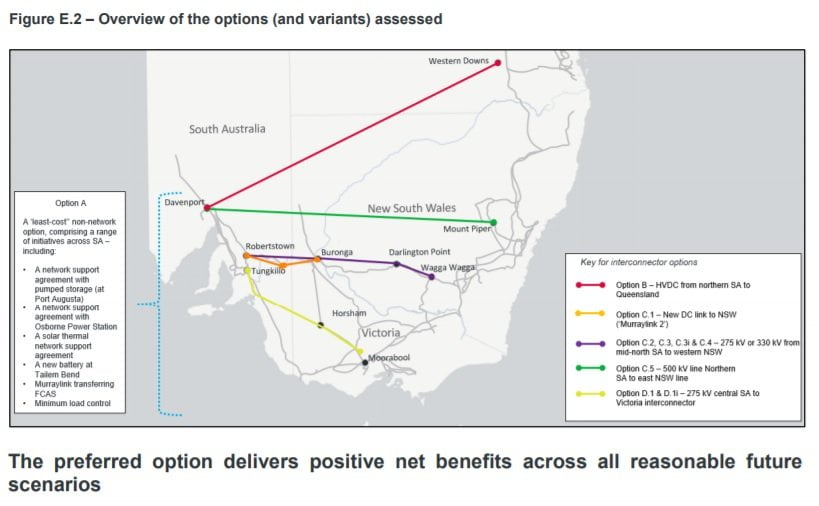 Current estimates show that the new interconnector would cost a total of $1.5 billion shared between New South Wales and South Australia. If work were to commence within the next year, the link would come online sometime between 2022 and 2024.

The Marshall Government has allocated $200 million to fast-track the interconnector, which would offer more choice of supply for South Australia, which is currently only linked to the grid by an interconnector to Victoria.

With the link to New South Wales, South Australia would be able to import additional baseload power, while at the same time being able to export surplus renewable generation.

Mr Marshal pitched the idea in his election campaign in March 2017 and within a week of winning the poll, said that the new link would be up and running by 2021-22, although a funding model had not yet been put together.

Interconnector will push wholesale prices in South Australia down – ElectraNet

ElectraNet says a key component of the overall benefits will be the ability to utilise lower-cost generation on the east coast of the NEM to supply South Australia in the near term, reducing reliance on expensive gas-fired generation in South Australia.

This, it said, will result in the wholesale price of electricity being lowered in South Australia as soon as interconnection is established. It will also result in a reduction in gas consumption for power generation in South Australia, freeing up gas for other uses

Mr. Masters said an interconnector with NSW was found to provide the largest net benefits to customers of all the options considered.

The options included an interconnector between Davenport in SA to Western Downs in Queensland, another link to Victoria, and one between Davenport, running in a straight line to Mount Piper.

The option which gave the biggest return was of a new 330 kV line between South Australia’s mid-north and Wagga Wagga in New South Wales, via Buronga. It is expected to deliver the highest net market benefits by helping to lower electricity prices, improve system security, and support energy transformation towards a lower carbon emissions future.

Interconnector will deliver savings when it is built

Mr. Masters said savings to South Australian residents could be delivered as soon as the interconnector was built.

“This would largely be due to the interconnector placing downward pressure on wholesale electricity prices,” he said.

Grattan Institute Energy Program Director Tony Wood stated in 2017 that it is critical to get the modelling for the project right. He said that it isn’t immediately obvious that an interconnector would lower prices in South Australia.

“With an interconnector you don’t build any new capacity and it’s not obvious that there is a lot of cheap spare capacity sitting around in NSW,” he said.

Mr. Wood said a full feasibility study is critical because under the revenue system for regulated assets, if an interconnector is built it will be the consumers of both states that pay for it, unlike for an investment in new power generation, where the risk is born by shareholders of the project.

In order to deliver the project by at least 2022, subject to environmental and development approvals, ElectraNet would partner with TransGrid, the manager, and operator of the high voltage electricity transmission network in NSW. TransGrid would fund the works within NSW.

Feedback is being sought on the draft report until August 10.