South Australia’s giant Tesla battery was switched on a day ahead of schedule on November 30, just in time to supply 59 MW of backup power to the state as temperatures and peak demand soared.

Typical of South Australia’s volatile summer weather, the battery was called into action again on the first day of summer, December 1. This time, it was to boost capacity in the face of vicious storms which downed power lines and left homes and businesses without power. 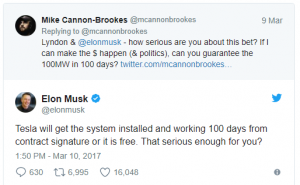 The Tesla battery project started out as a Twitter bet, when Tesla chief Elon Musk wagered that the project would be up and running within 100 days, or he would do it for free.

SA Premier Jay Weatherill took him up on the offer and Tesla delivered, hooking up a 100/129 MW battery in Jamestown to the Neoen wind farm in Hornsdale.

On November 30, temperatures across SA and Victoria hit 30+ degrees Celsius and real-time output from wind farms was low. The battery was flicked on and dispatched 59 MW of power into the grid to help meet peak demand. Running at full capacity, the Tesla battery can power 30,000 home for just over an hour.

The new battery comes as the Australian Energy Market Operator forecasts a Lack Of Reserve 1 for South Australia due to the hotter-than-expected November.

This means AEMO has indicated power generators in South Australia’s market should generate more to provide a buffer for increased energy demand ahead.

As part of its wider energy storage push, South Australia has also green-lighted more than $8 million in support of four new projects through the Renewable Technology Fund.

These include two major solar and battery storage projects, a thermal storage that holds heat generated from wastewater, and a hydrogen production project.

“The Renewable Technology Fund is harnessing this momentum so we can drive new projects and establish South Australia as a global hub for the storage of renewable energy.” 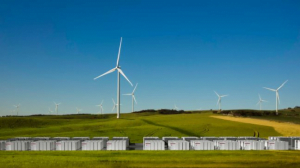 South Australian taxpayers are subsidising the Tesla battery’s operations with up to $50 million over the next 10 years.

The South Australian Government has the right to use the battery to prevent load-shedding blackouts.

It will also be able to use a portion of the battery’s output to provide system security services to the grid, in an effort to bring down prices.

The hot weather on the eve of summer prompted the Australian Energy Market Operator (AEMO) into taking the highly unusual step of paying power customers to reduce their electricity usage during the peak period.

The customer or customers involved have not been identified.

But they are likely to be heavy power users who volunteered to be directed to reduce their power usage under a “demand management” program.

The plan was enacted after the closure of the Hazelwood coal-fired power station in Victoria.

It provides the market operator with about 1,000 megawatts of demand management and emergency generation to use to help balance supply and demand in the grid.