Electricity rates – wholesale rates were trending downward to reach a low point in early June, mainly due to the increasing pace of renewable energy projects adding more supply into the market, but the failure of ageing coal generators caused a huge spike over the last few days.

This caused spot prices to skyrocket, and over the two following weeks, this has flowed into contracted rates – with NSW seeing the biggest increase. Peak rates for 2019 are up almost 1c/kWh compared with the start of the month. The good news is there is still a significant discount for 2020 rates due to the huge renewable generation pipeline.

Futures prices in all states under review were trending down by a few percentage points in May and June, mostly due to the number of large-scale renewable energy projects coming on stream in the first half of 2018.

That trend was reversed in New South Wales and Victoria as coal plants once again proved that they deteriorate fast and become a liability when that happens.

The energy sector’s biggest news in the last month was that the New South Wales Government is planning to build a brand new high voltage transmission network to unlock $18 billion worth of renewable energy projects investment in rural NSW.

The private sector is ready to go, but the infrastructure to feed the new renewable energy into the grid needs to be created first.

French Energy specialists Neoen, which partnered with Tesla in South Australia have also begun to build a $550 million wind farm at Bulgana, which is expected to generate 194 MW of power.

Queensland has a staggering 2GW of renewable energy coming on stream over the next few years as the Sunshine State lives up to its reputation. Queensland aims to produce 50% of its energy from renewable sources by 2030.

In South Australia, miners have signed up to a Power Purchase Agreement with SIMEC Zen Energy to buy energy from renewable sources, with up to 50% savings on their power bill. 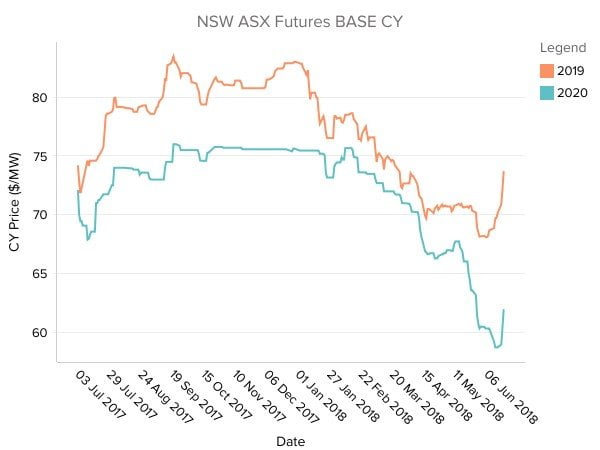 Wholesale futures prices in New South Wales were dropping in NSW by an average of 2%. Rates for 2019, however, shot up in the past week by about 8.2%.

2020 remains largely unaffected due to the renewable pipeline putting downward pressure on rates. Prices are still 40% higher than what they were in 2016. This is reflected in the rates that are currently being offered by retailers to large market electricity customers in New South Wales.

The big news in New South Wales is that the state government has announced that it will be building a new high voltage transmission network in the rural part of the state. There are $18 billion worth of private sector renewable energy investment projects waiting to get off the ground, but more infrastructure is needed.

In other news in NSW, AGL has refused a $250 million offer for its Liddell plant from Alinta Energy, describing it as derisory. AGL Energy said it will turn the site into a hub for renewable energy generation. 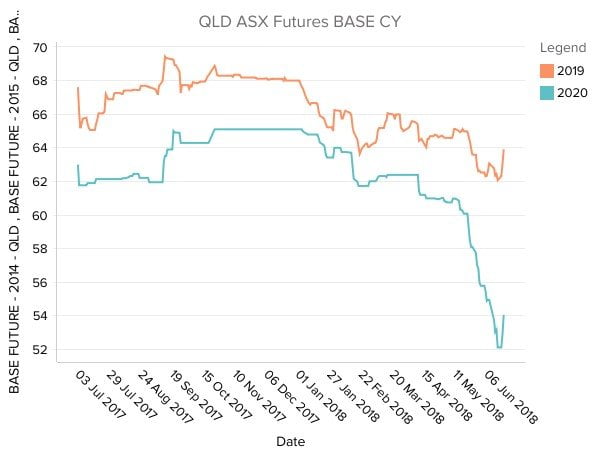 Queensland remains the most stable of the interconnected states, owing to the fact that the government still owns the majority of the electricity generation. Prices in Queensland were down substantially by almost 10%, but the recent spike caused them to climb back up for an overall reduction of 5.2%.

Futures prices are still 6.3% higher than what they were in 2016. This is reflected in the rates that are currently being offered by retailers to large market electricity customers in Queensland.

Queensland is pushing ahead with its drive to produce 50% of its energy needs from renewable sources. In May, the 100 MW Clare solar farm began exporting energy into the grid and a further 2GW of solar power planned for the near future.

Until late last year, Queensland had no large-scale wind or solar farms, even though it led the country in the installation of rooftop solar, with some 2GW of installed capacity.

Meanwhile, French renewable energy developer Neoen has received council planning approval for a solar farm of up to 500MW, along with battery storage, in south-west Queensland.

These projects will be dwarfed by a 1.5GW solar farm which is being proposed in south-east Queensland, as part of a massive new development application that would include two substations and a provision for battery storage. The project is headed by Sunshine Energy Australia. 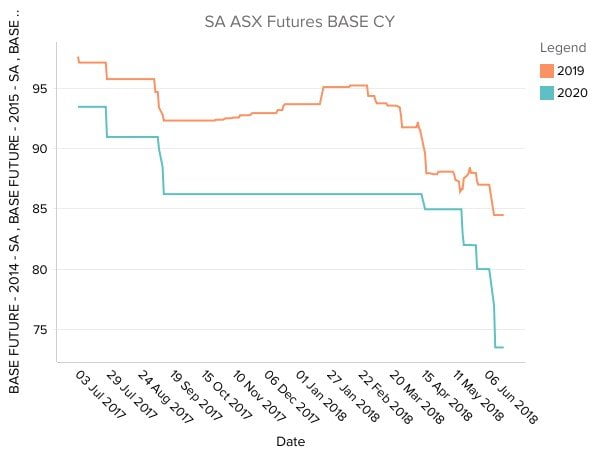 SA was the only state that was not affected by price increases in June. Wholesale futures prices in South Australia dropped in June (to date) by an average of 5.9%. The trend continued from May.

Futures prices are still 3% higher than what they were in 2016. This is reflected in the rates that are currently being offered by retailers to large market electricity customers in South Australia.

The big news in South Australia is that members of the mining lobby have signed a Power Purchase Agreement with SIMEC ZEN Energy to buy renewable energy. The deal promises to carve 50% off their energy bills.

SIMEC ZEN is an offshoot of Sanjeev Gupta’s GFG Alliance, which has purchased the Whyalla steelworks, promising to fuel them with renewable energy to make them profitable.

SIMEC ZEN plans to flood South Australia with renewable energy which it plans to distribute through Power Purchase Agreements as well as through the National Energy Market. 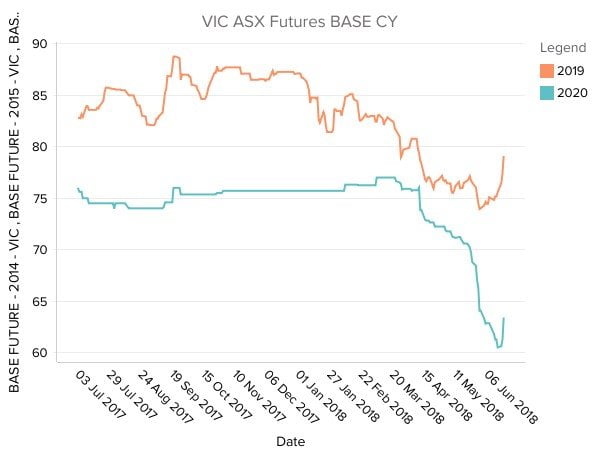 Wholesale futures prices in Victoria dropped in May (to date) by an average of 4.6%, but the spike caused by the failure of coal plants on the East coast caused them to climb back up, settling at 1.2% higher in June. Although the upward trend through June shows 1.2%, this does not reflect the reality of the situation, where prices for 2019 skyrocketed by 7%.

Futures prices are still 68% higher than what they were in 2016. This is reflected in the rates that are currently being offered by retailers to large market electricity customers in Victoria.

The big news from Victoria is that French renewable energy company Neoen has started work on the $550 million Bulgana wind and battery storage project.

The 194 MW project will supply power to Nectar Farms under a Power Purchase Agreement as well as selling energy back into the grid.

Another renewable energy project which is taking shape in Victoria is the addition of a 25 MW battery to the Gannawarra Solar Farm in Victoria’s North West. It will connect to Energy Australia’s system and also the National Energy Market.