Power Purchase Agreements, also referred to as PPAs, have been gaining popularity as Australian businesses look for security of supply, a smaller carbon footprint and more affordable electricity prices – but what are they and how can they help your business?

These agreements involve businesses buying electricity from one source, usually a renewable one, for a set period and at a fixed price – instead of from retailers. They have become more in-demand because they are a no-risk, cash flow-positive investment.

The country’s skyrocketing electricity prices, which have left many businesses in dire straits as their overheads went through the roof, have also reinforced the demand for Power Purchase Agreements.

PPAs allow clients to know what they are paying for, thus giving them more security. Commercial and industrial energy consumers found these to be a suitable medium-term solution for their energy bill woes.

The main gist of on-site power purchase agreements is that you’re essentially allowing a solar generation company to install solar panels on your rooftop for free. The electricity generated by these panels will be sold back to you at cheaper rates than traditional retailers might offer you.

You also won’t have to leave your current power supplier, so you can still tap into traditional grid power at times of shortfall.

Because the energy is generated on site, it is not subject to the expensive network tariffs distribution companies charge to transmit power from point A to point B.

Ownership is also a topic of concern for many prospective clients. Still, many PPA providers will pass on ownership of the solar power system to you once the period specified in the agreement expires.

All of these mean that you’re availing of a risk-free, 100% cash flow-positive investment. The company will also maintain and monitor the solar energy system to make sure that it’s always in peak condition. 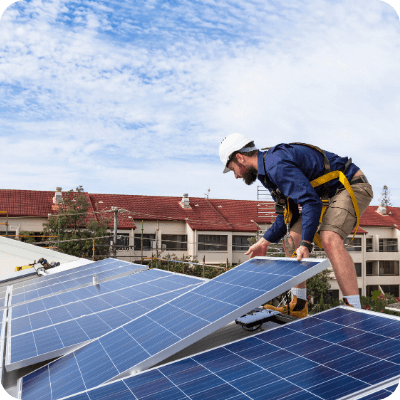 If you consume less than 25 to 50 GWh/year, partnering with other organisations may be the most effective way to underwrite a new power plant’s development.

Here, solar companies will assemble clients to build a solar generator that will feed energy to these grouped customers accordingly. The drawback is that these businesses need to be physically close to each other to work, although technology is continuously evolving.

Companies may also go into a multi-entity PPA. In this type of agreement, solar providers will combine several separate entities within the same state to get enough load to contract with the electricity generator.