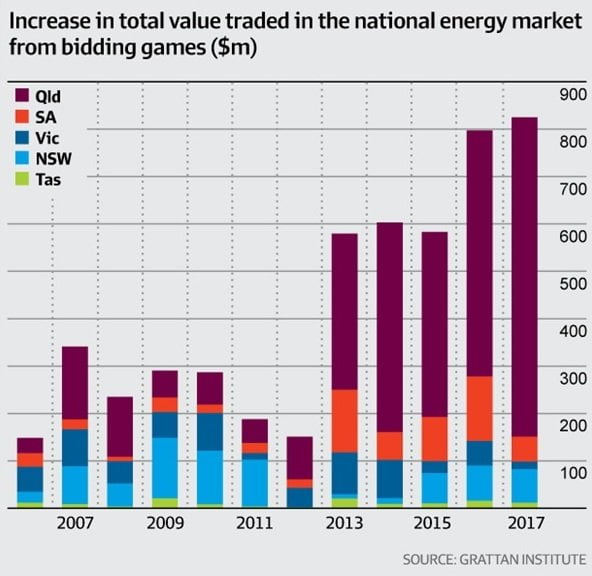 The government will ask the regulators to investigate the claims, which were made in a report drawn up by the Grattan Institute think tank.

The report had two other key findings – that high wholesale electricity prices are the new normal and that the closure of coal-fired Hazelwood in Victoria, Northern in South Australia and the scheduled closure of Liddell in New South Wales have been significant contributors to the current state of affairs.

The Grattan report, authored by Energy Program Director Tony Wood and Energy Fellow David Blowers, also stated that the government should come clean and tell Australians the truth – high energy prices are here to stay and it can’t fix the problem because it has no control over the issues that caused them. You can read the summary and download the full report on the Grattan Institute website.

What is energy gaming?

According to the Grattan Institute, ‘gaming’ involves electricity generators using their power in concentrated markets to create artificial scarcity of supply and force prices upwards.

The National Energy Market currently works on half-hour settlement periods and five-minute intervals for “dispatch” of electricity into the grid.  Large energy generators withdraw their bids just before a dispatch period starts and rebid at much higher prices to inflate the price for the settlement period, which then goes to all bidders.

Gaming mainly took place in Queensland and South Australia, but there are also signs of it taking place in Victoria since the closure of Hazelwood. 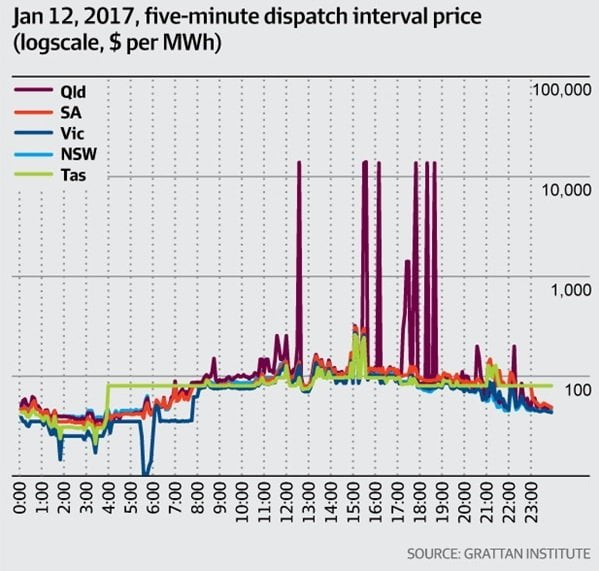 The trend could also emerge in New South Wales after the closure of Liddell in 2022, due to tightening of electricity of supply, although the risk of this happening could be offset by an increased supply of energy entering the National Energy Market from renewable energy sources.

The Grattan Institute observed that gaming has been part of the market for years and is even permitted by current rules, saying that they should be changed to eliminate or at least curb the practice.

Energy Minister Josh Frydenberg told the media that gaming is  “unconscionable and unacceptable” and its incidence had been reduced substantially after the government put pressure on Queensland to rein in their [state-owned] generator. He said that wholesale prices in the northern state fell 25 percent as a result. But between 2013 and 2017, the practice cost Queenslanders an estimated $2.3 billion.

The Australian Energy Market Commission had also passed a new rule requiring good-faith bidding and another rule reducing settlement periods to five minutes is in the pipeline. He admitted that the Grattan Institute report showed more must be done.

Mr Frydenberg said he will be writing to the Australian Energy Market Commission to investigate further and recommend rule changes.

The worst year for gaming was 2016-2017 and state-owned Stanwell and CS Energy were named as the worst offenders. Between them, the two companies supplied 71 percent of Queensland’s generation and made profits and returns on equity of 30 and 59 percent respectively. Publicly listed groups AGL Energy and Origin Energy posted profits of 5 and 10 percent.

The charges were rejected by Stanwell acting CEO Steve Quilter and CS Energy CEO Martin Moore, who said it was “nonsense”. Both chiefs said the companies complied with strict National Energy Market rules and that they had been cleared of any wrongdoing over high electricity prices in 2017 by the Australian Energy Regulator.

Energy gaming cost energy users $450 million in South Australia between 2013 and 2017, according to Grattan. The institute said that AGL and Origin were the highest suppliers with 67 percent between them. Origin says its share was less than estimated in the report and that it stood at 15 percent behind Engie’s 17 percent.

An AGL spokesman told The Australian Financial Review that the report recognised that price volatility was part of the market and that rebidding is a complex process. He said that AGL acts in accordance with rules regulating the re-bidding practice. An Origin spokesman said that the company follows tightened and strict bidding rules, adding that claims to the contrary fuels confusion that people have about energy and pricing.

Higher coal and gas prices contributed $4 billion of the surge and the impact of the closure of the Northern and Hazelwood coal-fired power stations, which forced the market to rely more on gas just as gas prices soared, contributed $6 billion, Grattan estimates.

This year wholesale prices have fallen as more generation has come into the NEM and the summer passed without major outages, and retail prices have also begun to fall. But there was a spike, particularly in New South Wales towards the end of June when coal generators failed.

Keep updated with the latest news in the energy industry

As an energy broker and consultancy firm, Leading Edge Energy always has an ear out on the latest energy market developments and on ways to save money on energy costs. We do this to ensure that we can provide businesses in Australia top-notch energy cost-reduction services.

Want to read more? Visit our Blogs and News section.

Or get started on saving your business money on your energy spend. Contact us at 1300-852-770 or e-mail us at hello@leadingedgeenergy.com.au. Our Experts are ready to guide you!