Demand Response has been touted by Australia’s Energy Market Operator (AEMO) as one of the measures that can help the power grid remain stable during periods of stress caused by heatwaves, drought and other factors.

The trouble is that the system is still in its infancy and needs major expansion in order to avoid blackouts, such as the ones that hit Victoria during the heatwave in late January. It’s clear that energy users and consumer groups want a major expansion of the system, but retailers are digging their heels in over the issue.

What is demand response and what opportunities does it create? 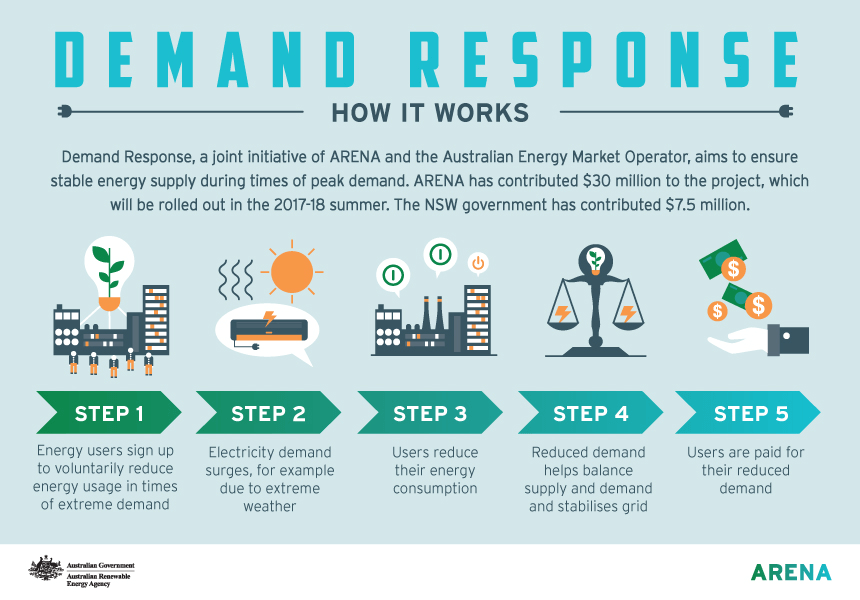 Demand Response, put very simply, is the scaling back of energy consumption in order to free up energy when the grid is experiencing a squeeze.

This model rewards those who send surplus energy from their rooftop solar panels, batteries and smart appliances back to the grid at times of peak demand. An example of this is when pool pumps temporarily stops working when there’s a power crisis.

Those extra “negawatts,” a term used to describe the unit of power saved due to consumption management and control,  help supplement supply and avoid the costly construction of new power stations or interconnectors.

Demand Response schemes set up by AEMO essentially involve higher-end energy consumers to voluntarily cut back on their energy use in return for payment or credits. However, to accomplish this successfully, the system needs to be broadened to create a much larger virtual battery.

During the January heatwave, AEMO implemented the Reliability and Emergency Reserve Trader (RERT) safety measure. This measure, wherein AEMO calls on a panel comprised of companies in Australia that can reduce power consumption during times of peak demand,  includes demand response, but during the heatwave was so high that the response was not enough.

AEMO subsequently ordered Victoria’s heaviest energy-user – smelter Alcoa Australia – to shut down operations in a load-shedding effort to make up for the shortfall. The measure worked to a degree, preventing a blackout from occurring earlier in the day but ultimately a blackout could not be avoided as the demand continued to soar, causing the system to collapse during the heatwave.

Apart from causing blackouts, such scenarios push electricity prices through the roof because, as in the classical economic theory, – demand outstrips supply.

The Australian Financial Review recently reported that the energy-intensive user, BlueScope Steel, energy innovators Tesla and the Australian Competition and Consumer Commission (ACCC) have lined up against the electricity retailers to try to push through new rules that would allow a major expansion of demand response.

Network owners such as AusNet Services, the AEMO and consumer groups are also broadly backing changes to the rules to allow large consumers to profit from directly participating in demand response in the wholesale market. In these proposals, consumers could also engage third parties – other than their own retailer – to participate in the market by modifying their consumption of energy in response to fluctuating prices.

The process mentioned in the article was fairly simple. According to Bethany James, the participant interviewed by ABC, they would receive a text message from their electricity provider telling them when a peak period is coming, which would allow for some preparation. Later on, text messages would tell them when the period has started and ended, followed by another message within a few days telling them if they’ve met their goal. Participants stand to receive a $10 discount if they hit their target.

The Melbourne resident seemed optimistic about demand response in Australia saying that she appreciated the chance to “make a difference to your life for just those two hours [is] a really great thing.” For her, the demand response scheme would allow her to save money and help reduce the stress on the grid which would hopefully eliminate blackouts.

High electricity prices in the country are a considerable challenge to many Australians, making significant dents on both household budgets and business bottom-lines. Demand response schemes can quite possibly alleviate some of the heavy costs.

What is holding back the market?

Dominant energy retailers AGL Energy, Origin Energy, and EnergyAustralia, as well as smaller retailers, broadly support the concept of demand response however, they all oppose the proposed rule change.

They argue that either there is no need for the rule, that it would drive up costs, or that they themselves are best placed to carry out those functions with their customers.

The Australia Institute, which proposed the rule change along with the Public Interest Advocacy Centre and Total Environment Centre said big retailers make bigger profits the more energy their customers waste, so it makes business sense that they are lobbying to undermine demand response.

Australian Competition and Consumer Commission (ACCC) chairman Rod Sims has voiced strong support for opening up the market, noting it has the potential to constrain the pricing of generation businesses, limit the need for new power plants and lead to lower prices.

Mr Sims told the Australian Energy Market Commission, which is considering the rule change, that the ACCC’s inquiry into retail power prices last year had found that retailers “may not be employing demand response at an efficient level” and noted only “weak” incentives for them to use it with smaller customers.

AEMO also urges the unbundling of demand response services from retailing to promote competition and consumer choice and to allow all available resources to be accessed.

A study by ClimateWorks Australia in 2014 found about 3.1 gigawatts of demand-side response potential across Australian industry, equivalent to about 42% of total demand from industry.

Want to learn if your business can save money through Demand Response?

If you want to find out if your business can make savings by signing up to a demand response scheme, our Energy Management Consultants can help cut through the chatter.

Call us today on tel: 1 300 852 770 or send us an email on info@leadingedgeenergy.com.au to book your obligation-free consultation.