A few years ago, Leading Edge Energy drew up an article about how Australians were paying some of the highest electricity prices in the world. This was especially true in South Australia where their energy bills saw a rates increase on July 2017 of as much as 47.13¢ per kilowatt-hour.

The answer isn’t too cut-and-dried but we’ll try to guide you along.

Putting a price cap on electricity prices in Australia

In February 2019, reacting to the inexcusably high prices of electricity around the country, the government announced that it would be setting a ceiling for power prices for consumers on standing offers. The price-capping regulation could considerably adjust the median rates and thus serve as a guide for home- and business-owning electricity consumers. 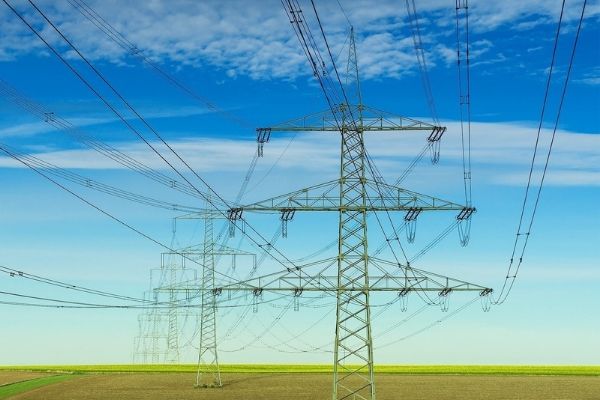 The government decided to take action after the Australian Competition and Consumer Commission (ACCC) submitted findings that standard retail plans (another term for standing offers) were unreasonably expensive.

Aside from that problem, the high prices of standing offers are now more likely to cause consumers who aren’t following the energy market as keenly as others financial issues instead of providing them with a more stable default rate as they normally should.

For those who aren’t too familiar with standing offers, these are government-regulated energy plans that tend to be more expensive than market offers (also known as variable retail rates). Their benefit over market offers is that they’re more stable because retailers can’t adjust the prices often, and they don’t come with exit fees.

On the other hand, market offers can fluctuate wildly depending on the retailer. However, they can also come with discounts and promos. Those make market offers more attractive, especially to consumers who are actively watching electricity prices.

Advantages and disadvantages of putting a price cap on electricity prices

Going back to the topic at hand,  the reference prices set by the Australian Energy Regulator (AER) will largely benefit financially vulnerable consumers, as well as those who aren’t up to following the rising and falling of electricity costs. This can be a boon to some Australians currently on standing offers

The downside of setting a price cap, however, is that the changes may mean that lower-priced market offers may actually become more expensive as electricity retailers try to recoup their losses from the higher-priced standing offers which will now be capped. This adjustment will be particularly troubling to consumers who are on those lowest-priced contracts.

As a whole, however, the government’s initiative is to give Australians, especially families and small businesses, more relief from their energy bill woes.

As energy minister Angus Taylor puts to the price-capping critics,

“For too long, the energy companies have been taking advantage of loyal Australian families and small businesses who have been paying the highest electricity prices on the market.”

Yes, there are some groups like energy companies who are critical of, or being cautious towards the project, fearing unforeseen consequences, but as the project just recently launched a few days ago, the overall effects remain to be seen.

One thing is for sure, Australians do need some relief from high electricity costs and hopefully, the AER’s reference prices can set a precedent for better things to come for consumers.

How do Australian electricity prices compare to other countries in 2019?

More than two years ago, electricity costs in Australia were the highest compared to other Organisation for Economic Cooperation and Development (OECD)-member countries. But how far have we come since then?

If we were to go with GlobalPetrolPrices.com’s March 2019 data on electricity costs for all 36 OECD countries, then Australia has made some very significant strides in shaking off the dubious honour from 2017 when we had the highest energy prices in the world. 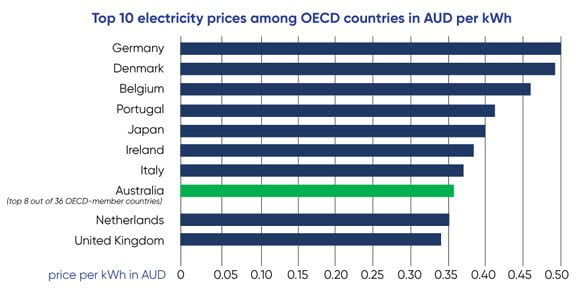 Data used in this table from globalpetrolprices.com (March 2019)

As you can see in the graphic above, this year, we’ve moved down from the top spot to 8th place. This could be taken as an improvement as the states that had the most expensive electricity rates in 2017, namely South Australia, NSW, Queensland, and Victoria, would average about .39 AUD per kWh at the time.

Of course, given the AER’s new price capping initiative, we can expect to see some interesting shifts in the price of powering our homes and businesses. Perhaps we’ll move further down the list; let’s see what the coming months bring.

We may have moved down the list of the world’s most expensive electricity prices but power bills are still a big concern for business owners, especially considering how these affect your budget and profits. But it’s not a hopeless case!

Leading Edge Energy’s energy management consultants have the know-how to help you make your site more energy-efficient and even help you determine where you can make savings on your electricity bill.

Give us a call at 1300-852-770 or drop us a line at hello@leadingedgeenergy.com.au for enquiries. Or, if you’re absolutely sure you want to engage our comprehensive energy management consulting services, head on over to our energy evaluation page to get started.