Australia’s electricity supply security was moderate to critical for 2020, with no improvement over 2019 as preventing power blackouts becomes more difficult due to cheaper but weather-dependent renewable energy sources replacing coal-fired energy.

The findings were made public in the Energy Security Board’s 2020 Health of the National Electricity Market report on Tuesday 5 January.

The Federal government has also indicated that its projections for reductions in greenhouse gas emissions show the electricity market exceeding the 50 percent renewable energy target.

Energy Minister Angus Taylor had only last year said the target would drive a wrecking ball through the economy. 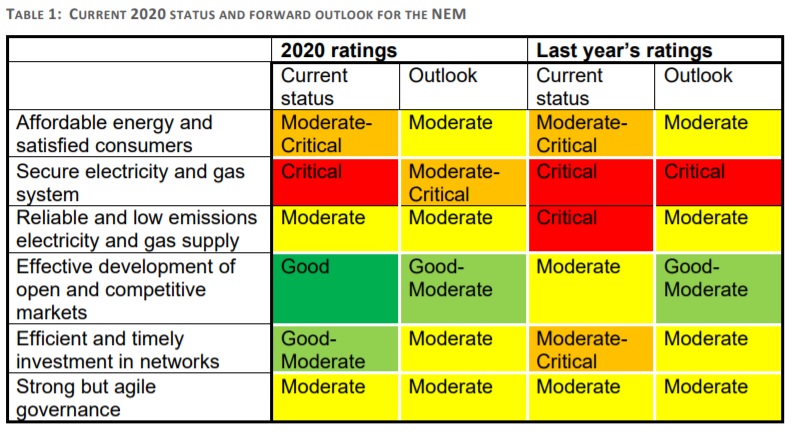 Renewable energy generation is set to double in the next decade, according to the official projections released by the Department of Industry, Energy, Science and Resources.

Rooftop and large-scale solar and wind projects are expected to rise from 27 percent of the National Energy Market to 55 percent by 2030.

But the ESB report highlighted a consistent need by the Australian Energy Market Operator to intervene more than 250 times in the period 2019 to 2020 when compared to just 20 times between 2017-2018.

AEMO intervenes to ensure the security of Australia’s electricity supply by either ordering some generators to cut back supply as excess power could damage the grid.

This intervention is usually imposed on renewable energy generators during the period where the sun shines the most between 10 am and 4 pm.

The excess solar energy produced during this period contributes to the Duck Curve, which is a representation of how electricity demand is high in the early morning, before dipping into a deep through during the day and then rocketing up at the end of the day as the sun sets.

In addition, AEMO also intervenes by requesting high-peaking gas plants which can fire up quickly and plug the gap at times when supply is not high enough to meet demand.

Energy Security Board Chairman Kerry Schott insisted that Australia must stop kicking this problem further down the street as it would inevitably come back to bite the country harder.

“The Health of the NEM clearly shows the repercussions of rapid change in our electricity system and highlights the absolute urgency of addressing them. It’s now time for tough, united decisions. If we keep kicking this further down the road, it’s going to cost us all more for electricity in the future.” 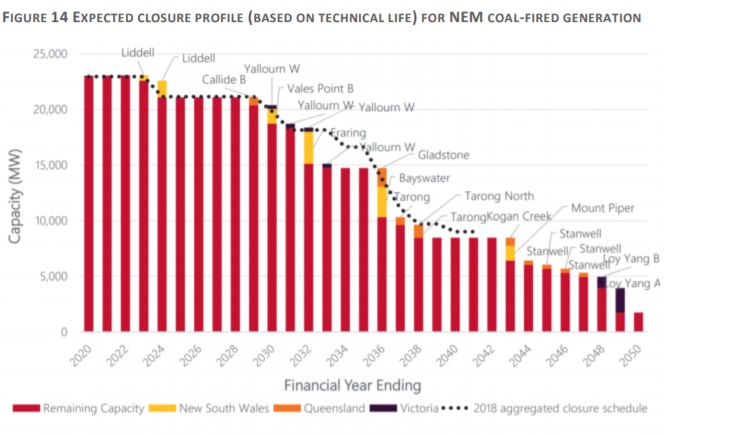 The ESB report said that the problem of keeping the power grid stable without thermal power plants was a matter of increased urgency that needs to be addressed.

She said that Australian thermal generation assets are “no longer fit for purpose for the energy transition and beyond”.

She also said that as traditional fossil-fired assets age, they will face cost pressures and will be displaced from the market by new and cheaper resources.

As a result, they will operate differently, or even possibly retire earlier than they were scheduled to.

The ESB put forward one option to address the state of Australia’s electricity security by fostering an approach that some states have introduced to drive ‘firming’ across the whole NEM.

Firming is the concept of having more electricity supply on tap to release onto the grid when supply falls short.

In the past, this was limited to high-peaking gas plants, but this has now changed to include demand response (voluntarily cutting consumption), virtual power plants, rapid-release hydro, big battery storage and other emerging technologies to fill the gaps left by wind and solar.

Other options put forward include an operating reserve to ensure flexible and on-demand power supply when it is needed and a beefed-up Retailer Reliability Obligation that requires electricity retailers to guarantee they have enough generation available to meet peak demand.

The ESB has already ruled out a centralised auction process for generation capacity as part of its post-2025 redesign process for the NEM.

Dr Schott voiced concern about security problems in some parts of the grid and rising pressure on electricity distribution networks from surging rooftop solar generation.

This, combined with growing large-scale renewable generation and low wholesale prices, means it is vital that post-2025 reforms that can work alongside government policy schemes are put in place.

Federal Government supports renewables and will back AEMO’s plans

A spokesman for the Energy Minister said the Morrison government supports renewables with its commitment to integrate wind and solar in the grid by backing AEMO’s plans.

It is investing in large-scale transmission lines that will link solar and wind projects to the grid and funding power plants to back up intermittent supply from renewables with dispatchable power.

“The Morrison Government is supporting the record levels of investment in renewable energy generation by backing every priority transmission project under the Integrated System Plan and much needed dispatchable 24/7 generation through the Underwriting New Generation Investment Program and the $1 billion Grid Reliability Fund,” the spokesman said.

The government’s plans for dispatchable power include a commitment to fund a gas plant in NSW’s Hunter Valley if private industry does not, to replace the Liddell coal-fired power station.

It is also planning a $9 million upgrade to the 40-year-old Vales Point coal-fired power station in NSW.

Mr Taylor described the redesign of the NEM as the most critical energy reform governments have been tasked to deliver by the national cabinet.

He said the NEM was “at a turning point” given the availability of new technologies and the need for large-scale replacement of older thermal plants, and that taking action now was critical to minimise disruptions and avoid unintended consequences.

“We need long-term signals for private sector investment in reliable generation and storage, to replace exiting generators with like-for-like capacity.”

On the flip side, the report highlights that access to reliable and low-emission electricity supply is less of a worry, now rated moderate rather than critical as in 2019.

The ESB did, however, note that there were some concerns for NSW in 2023-24 after AGL Energy’s Liddell coal plant is mothballed.

As an energy broker and consultancy firm, Leading Edge Energy always has an ear out on the latest developments regarding Australia’s electricity supply. We do this to ensure that we can continuously provide businesses with top-notch energy cost-reduction services.

Want to read more? Visit our Blogs and News section.

Want to get started on saving your business money on your energy spend? Contact us at 1300-852-770 or e-mail us at hello@leadingedgeenergy.com.au. Our Experts are ready to guide you!